Most of you are probably planning to be in a car at some point this winter, so be sure to wear your seatbelt, obey the speed limit, and be extra cautious in “winter driving conditions”. It is actually physics that makes being in a car on an icy road hazardous; friction is an important part of keeping a car under control. However, your state and local transportation departments make use of some pretty interesting chemistry to keep roads safer for travelers in the wintertime. In addition to plowing, one of the ways that highway workers keep roads clear of ice and snow is by spreading salt on the roads. Even though salt can cause rust and corrosion on cars, bridges, and other parts of the highway, it more than makes up for this costly damage by saving lives. Let’s take a look at how it works.

Pure water freezes at 0°C; adding salt to water depresses or lowers the freezing point below zero. When you remove heat from water (or any substance), the molecules slow down. The freezing process occurs when the molecules stop sliding and tumbling all over each other (liquid phase) and settle into fixed positions in a large network called a crystal lattice, which is the solid phase. The molecules are still moving, but in the solid phase that motion involves bonds stretching and compressing or the atoms wiggling a little bit. This is called vibrational motion.

When a solution of salt in water is cooled to a low enough temperature, the water molecules begin to stick together in an organized way to form solid crystals. The crystal framework tends not to include the salt ions because the ions would disturb this organization. So when you cool a solution enough, the ice crystals that start to form are made of pure frozen water. You can actually purify salty water like this, by freezing a portion of the solution and washing the salty water off of the ice crystals and then thawing the ice to produce pure water. Eventually, if you cooled it enough, the whole solution will freeze, but it does not have a sharply defined freezing temperature. Getting the water molecules organized into a crystal from a solution requires that you remove more energy (actually free energy) than if you are freezing pure water, so the water in a solution typically does not start freezing until it reaches a lower temperature than the normal freezing point. This is true of all solutions, not just those made with water.

The difference in temperature between where the pure solvent (water in our case) freezes and where the solution starts to freeze is called the freezing point depression. How low Salting Roads you go depends upon what the solvent is and how concentrated the solution is. The more concentrated the solution, the lower the freezing point. This is why if you freeze a solution completely, you have to keep lowering the temperature. As the pure water freezes away from the solution, the concentration of the solution remaining increases. How does your Department of Transportation use this chemistry to keep roadways clear of snow and ice in the wintertime?

Highway workers use salt in two ways: 1) to melt ice that is already on the roadway and 2) to prevent ice from forming on the roadway. The second one is a little easier to understand, so we will start there. Let’s say a snowstorm is forecast for your town. Municipal workers get out and spread salt on the roads. As the storm hits, snow starts to fall, but the road surface is warmer than the air, so the first flakes melt. As they melt, the salt dissolves in the liquid water. Now you have a solution of salty water, which has a lower freezing point than pure snow, so that even though the additional snow might cool the road enough to “stick” to the road surface, the temperature will not get cold enough to freeze the solution the way it could freeze pure water. In the end, the real snow removal is done by the plows, but salt plays a crucial role in preventing snow and ice from bonding to the pavement. 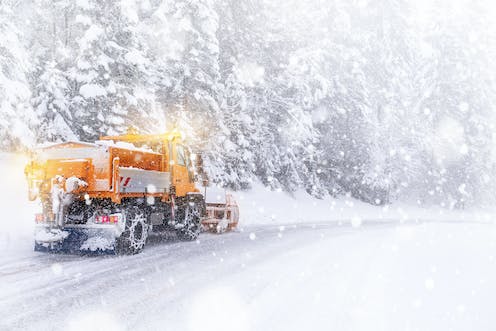 “Hold it!” you say. Suppose the temperature does get cold enough to freeze the solution. Or suppose that enough snow falls so that the salt water solution gets too dilute to work, what happens then? In both of those cases, snow could build up on the road. This is why your highway workers are out there round-the-clock, plowing and spreading more salt as long as the storm is in the area. Communities with really cold temperatures, like parts of Canada and Alaska, where it can get to –20°C (below zero on the Fahrenheit scale), don’t even bother with salting the roads, because it doesn’t help. They typically plow off as much as they can and use gravel or sand to add traction.

How does it work if the road already has snow or ice on it? You may have seen how spreading salt on an icy sidewalk will cause the snow or ice to melt. The very beginning of the melting process begins where solid ice contacts solid salt. At the surface of ice crystals, water molecules do not have the same stable arrangement they have on the interior; they are more mobile and more reactive. So the surface ice reacts with the surface of the salt crystals, allowing a small amount of salty solution to form. This first step is relatively slow, but then the growing solution continues to dissolve more salt and melt more ice. Passing vehicles warm the slush through friction, which speeds the dissolution of the ice and may crush the salt and ice together, which will increase the surface areas of the particles in contact with each other. Some communities use “prewetted” salt (usually rock salt with a CaCl2 solution sprayed on it) to speed the process.

Putting salt on the roads to lessen the buildup of snow and ice began in the 1930s, and by the 1960s, it was used by most communities where snow and ice are a problem. Concerns about the effect of the use of sodium chloride (common table salt) on the environment have prompted some state and local road crews to explore the use of more environmentally friendly salts, such as magnesium chloride and calcium chloride. These two salts have the advantage of being more effective at lowering the freezing point and there is some interesting chemistry behind this benefit.

As you probably know, sodium chloride has the formula NaCl. When it dissolves in water, it dissociates into its ions: Na+ and Cl”, producing two ions in solution for every NaCl formula unit. Magnesium chloride (MgCl2) and calcium chloride (CaCl2) dissociate to three ions each because the metal has a 2+ charge and there are two chlorides per metal ion:

It is the number of dissolved particles that determine the extent of the lowering of the freezing point of a solution. So although NaCl produces two ions, MgCl2 and CaCl2 each produce three, making them more effective. Other variations include mixtures of the magnesium and calcium chlorides, as well as magnesium and calcium acetates, Mg(C2H3O2)2 and Ca(C2H3O2)2.

The technology of salting roads has become fairly sophisticated. Often, these salts are dissolved in water or some other solvent so that they can be sprayed onto the road surface. Having the deicing substance in a solution (i.e., fluid) form makes it possible to pump through hoses, which allows for a more targeted application. In addition, various anticorrosive substances are added to protect highways and cars from the damage the salts can cause over time. Some 15 million tons of deicing salt is used each year in the United States and about 4–5 million tons in Canada.

You may have seen signs that warn about bridges freezing before road surfaces. This is because bridges are more exposed and not insulated by the ground from underneath like the rest of the highway. Some high-tech highway bridges have been constructed with deicing sprayers built right into the pavement, complete with sensors that detect when conditions are right (e.g., cold temperatures, high wind speeds, high humidity) for ice to form. The sensors detect the possible formation of ice, and the deicing sprayers go to work to keep the roadway from freezing.

Highway engineers have been working with other interesting variations. One deicing material that is currently on the market mixes magnesium chloride with sugar cane or sugar beet molasses. The sticky molasses keeps the magnesium chloride from getting blown or washed off the road surface. There are also substances that are added directly to the top layer of concrete or asphalt when the road is built or repaved that help prevent ice from forming. Highway workers can then get away with using less salt than before, which is cheaper, easier on the environment, and helpful in preventing corrosion. Scientists and engineers continue to develop new ways to keep winter highways safe while minimizing expense and environmental harm. Just another way that chemistry is keeping you out of harm’s way.

Doris Kimbrough teaches chemistry at the University of Colorado-Denver.