|  No Comments
Bob Weber
The Canadian Pres
Published Thursday, December 19, 2019 8:23AM PST
These are the top weather stories of 2019
Environment Canada’s David Phillips break down the top five.

OTTAWA — Wet. Cold. In the dark. And puzzled.

That about sums up how the weather in 2019 left Canadians feeling, says David Phillips, Environment Canada’s chief meteorologist.

“It’s almost as if normal doesn’t happen any more.”

What do you make of a year that saw thunder at the North Pole and farmers needing drought and flood insurance on the same crop? A year that had seven straight months of freeze in southern Canada at the same time the Arctic was so warm it lifted the country’s average temperature to above normal?

And one that dumped a winter’s worth of snow during harvest and destroyed Halloween?

“It’s almost as if the climate was wobbling all over the place,” Phillips says.

When he began compiling Canada’s yearly Top 10 weather stories 24 years ago, Phillips used to have to scratch and claw to eke out the list. The challenge now is the opposite.

“Another record-setting Ottawa River flood” is at the top. Three years after what was supposed to be the flood of the century, more than 6,000 homes were flooded or threatened in April after the river broke water level records by 30 centimeters. 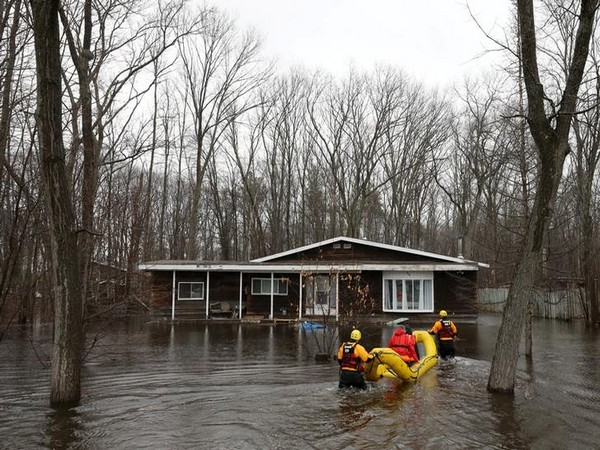 Montreal declared a state of emergency. Ottawa’s Chaudiere Bridge closed. Hundreds of people laid sandbags to keep the water from streets and homes. Two died, one in Ontario and one in Quebec.

Hurricane Dorian – the worst of several damaging Atlantic storms in 2019 – came second. Even after wreaking destruction on the Bahamas, the storm had enough juice left to uproot century-old trees and toss fishing vessels onto the beach in the Maritimes.

Eighty per cent of homes and businesses in Nova Scotia and nearly half a million Atlantic Canadians lost power.

On the Prairies, it was snow – in the wrong place and at the wrong time. Calgary got 32 centimetres at the end of September and slogged through the greatest depth of it on the ground in 65 years.

Snow and rain beat down crops and delayed harvest for weeks across the entire grain belt. In Winnipeg alone, snow damaged more than 30,000 trees on public land.

More than 6,000 people had to be evacuated from their First Nations communities. At the peak of an early October storm, 250,000 people were without power.

Nor was the wet limited to the West. Torrential rain forced 20 Quebec municipalities to postpone Halloween until the next day.

It seemed particularly cruel after a winter during which southern Alberta was 14 C colder than normal and the British Columbia coast 9 C below average.

And summer never seemed to show up. Edmonton had 55 days of rain between June and August, the second-most on record.

Meanwhile, the Arctic was warm. And not just by Arctic standards.

In July, the remote Canadian Forces station Alert at the top of Ellesmere Island reached 21 C, warmer than Victoria. In Inuvik, N.W.T., temperatures were above normal every single day between Sept. 1 and Nov. 11. Sea ice was so late and unstable in Cambridge Bay, Nunavut, that at least two Inuit travelling parties fell through, but survived.

For several years, says Phillips, weather extremes have been the story. Don’t expect that to stop.

“It’s the wildness of it, the variability of it, that is really the mark of climate change,” he says. “It’s almost as if it’s a wild card out there.

“If we look forward, I just don’t see it getting any quieter, any calmer, any less disruptive.”

3. No-good Prairie fall as Calgary and Winnipeg get hit by early and heavy snowstorms.

4. A brutally cold February across the country.

5. Record summer heat in the Arctic.

6. On the Prairies: Too dry early on; too wet (snow and rain) later.

7. Torrential rain forces some Quebec municipalities to postpone Halloween by a day.

8. Spring missing from Alberta through to Atlantic Canada. Ontario farmers face one of the latest starts to planting season.

10. Fewer fires, more burning. A reprieve of about 40 per cent from 2018’s record number of forest fires, but amount of land charred only decreases by one-fifth.

This report by The Canadian Press was first published Dec. 18, 2019.