Five Reasons Why Freezing Rain Really Is The Worst

Freshly fallen snow and heavy rain can all make a rush-hour commute frustrating, but freezing rain is perhaps the most deceiving and destructive of all winter precipitation.

Freezing rain does not bounce when it hits the ground like sleet does, and it does not runoff as warm rain does.

Due to it being benign rain initially, the onset of freezing rain may be completely missed by those where freezing rain is falling until it begins to accumulate as ice.

Here are five reasons why freezing rain is the worst precipitation type:

1. It Could be A Silent, Invisible Killer

Early in a freezing rain event, bridges, roads and metal surfaces become coated with a clear, thin layer of ice that makes them slippery. This ice is often referred to as “black ice” because it is nearly invisible to drivers. Perhaps ice is one of those things that is slightly better in surplus since we can actually see it.

Ice created by freezing rain can also be hidden by snow or sleet that falls after freezing rain transitions to one of those precipitation types. This makes the ice nearly impossible to see with extremely poor traction under the blanket of snow.

2. It Weighs Down Everything and Leads to Tree Damage and Power Outages

It’s harder for snow to accumulate on bare trees and power-lines without it falling or blowing off, but ice can easily accumulate on those surfaces. With the extra weight of the ice, power-lines and tree branches can snap, leaving people without power and with an even more treacherous trek to work or school.

Just a 1/2-inch accumulation on power lines can add 500 pounds of extra weight.

Wind only adds to the misery by forcing trees to snap even easier.

3. It Generally Occurs On the Southern Periphery of Winter Storms

Because there must be warm air to produce freezing rain, it generally falls further south than snow. Freezing rain sometimes marks the southern edge of wintry precipitation in weather systems. That southern edge can dip into areas not used to dealing with wintry weather such as the South.

Freezing rain can also occur in valleys where cold air can get dammed or stuck. Because cold air sinks below warm air, it sometimes can get stuck in pools or forced into lower elevations by wind such as cold air damming situations that occur a few times each winter in the Southeast east of the Appalachians. When rain or drizzle glides across these areas, it falls into the colder air below and freezes on contact.

Arguably, conditions in either snow or plain rain are easier to deal with as a motorist than the fine line in between the two.

4. When Icicles Fall, They Can Be Deadly and Damaging

Most of us like the sight of the icy stalactites or an icy curtain on buildings, but watch out when they fall.  Due to their spear-like shape, they can pierce whatever they hit on the way down to the ground. Like snow, when ice comes down from office buildings, it can be damaging to cars and anything else the lies below. 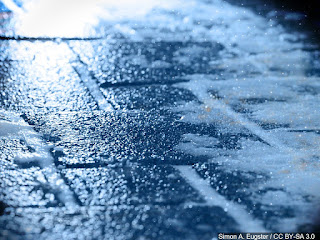 5. It Cannot be Plowed and It Does Not Runoff

Although roads can be salted or sanded, this doesn’t always remove the ice. Snow plows usually cannot remove ice either unless it is thicker and easier to break up.

Unlike rain, freezing rain does not generally runoff until it is warm enough to melt.

Often the only way to get rid of ice is to wait for it to melt or to melt it with salt if you have it on hand.

Tags: Five Reasons Why Freezing Rain Really Is The Worst